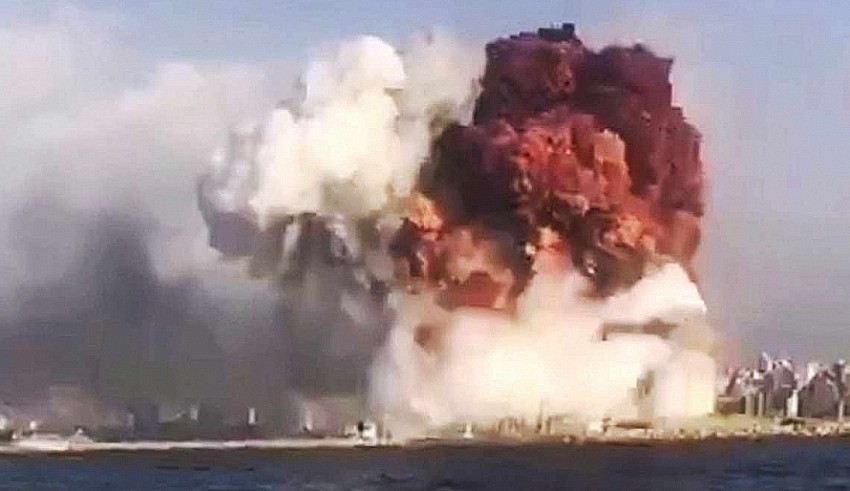 At least 145 people are dead and 5,000 others injured after two explosions tore through the city of Beirut Tuesday, wiping out city blocks, flipping cars over and shattering windows.

Early reports say fireworks and ammonium nitrate appear to have been the fuel that ignited the blast, but investigators say it’s still unclear what exactly caused it.

Video of the disaster’s initial moments shows sparks and lights inside the smoke rising from the blaze, just prior to the massive blast. That likely indicates that fireworks were involved, said Boaz Hayoun, owner of the Tamar Group, an Israeli firm that works with issues involving explosives.

“Before the big explosion, you can see in the centre of the fire, you can see sparks, you can hear sounds like popcorn and you can hear whistles,” Hayoun told The Associated Press. “This is very specific behaviour of fireworks, the visuals, the sounds and the transformation from a slow burn to a massive explosion.”

Moments later, a second, much larger explosion happened. It blasted through the city, creating a giant mushroom cloud with a force of a 3.5 magnitude earthquake, according to Germany’s geosciences centre GFZ.

Hans Kristensen, director of the Nuclear Information Project at the Federation of American Scientists, told Global News the fire is most likely what set off the second explosion.

“You can see the burning on the backside of the building for a while, then suddenly kaboom,” he said.

Kristensen explained when the second blast went off, an enormous pressure wave was created by the compact transformation of energy in the chemicals.

Ammonium nitrate are visible in the plume of the explosion

The chemicals from the ammonium nitrate are visible in the plume of the explosion, he said. In videos of the blast, you can see the colour of red and orange, which are the colours of the chemical, Kristensen added.

Then you see a doughnut shape quickly emanate out from the explosion and then disappear. This is followed by smoke that comes up from it (the mushroom cloud), which is the third part of the event, he explained.

What caused the explosions?

The exact cause of the explosion is still unknown.

The second blast could have been caused by the detonation of more than 2,750 tons of ammonium nitrate that had been stored in a warehouse at the dock ever since it was confiscated from a cargo ship in 2014, according to Lebanon’s Interior Minister Mohammed Fahmi.

Investigators are still trying to determine whether the blasts were accidents or intentionally triggered.

Ammonium nitrate is an industrial chemical commonly used in fertilizers and explosives. It’s considered relatively safe if uncontaminated and stored properly but it is extremely dangerous if contaminated, mixed with fuel or stored unsafely.

It’s made all over the world and is relatively inexpensive.

A large quantity of ammonium nitrate exposed to intense heat can trigger an explosion, Kristensen said. Storing the chemical near large fuel tanks, in large quantities and in a poorly-ventilated facility could cause a massive blast. The larger the quantity, the more risk it will detonate.

“It is a highly volatile material that should not be stored in a warehouse,” he said.

History of ammonium nitrate inolved in a deadly catastrophe

This isn’t the first time ammonium nitrate has been involved in a deadly catastrophe.

In Texas in 1947, a cigarette started a fire aboard a ship carrying around 2,300 tons of ammonium nitrate. The chemical exploded and caused a chain reaction when a nearby ship, also carrying the compound, exploded, setting off fires at chemical tanks and oil refineries near the post. Around 581 people were killed.

And in 2015, explosions at a warehouse storing ammonium nitrate and other chemicals in the Chinese port of Tianjin killed at least 116 people.

How big were the explosions?

The power that comes from 2,750 tons of ammonium nitrate blowing up is hard to calculate because it depends on a variety of factors, such as whether it was stacked on top of one another, Kristensen said.

“But there are a couple of early estimates that say it is equivalent to 0.24 kilotons, so 240 tons of TNT,” he said.

This number is close to the very lowest yield option of a nuclear bomb, he said.

The atomic bomb dropped over Hiroshima was 15 kilotons.

A shockwave is seen during an explosion in Beirut, Lebanon, Aug. 4, 2020, in this picture obtained from a social media video.

A shockwave is seen during an explosion in Beirut, Lebanon, Aug. 4, 2020, in this picture obtained from a social media video. Karim Sokhn/Instagram/Ksokhn + Thebikekitchenbeirut/via REUTERS

Not likely a nuclear explosion

When the blast happened, initial rumours were calling it a nuclear explosion, but there are a lot of things wrong with this theory, Kristensen warned.

First, the colour of the cloud was wrong, he explained. If it were a nuclear blast the cloud would be, for the most part, white. But the explosion in Beirut was red and orange, indicating a chemical explosion.

There also wasn’t a bright white flash, which is what happens with a nuclear explosion, he said.

“The energy in a nuclear explosion comes from uncontrolled fission of atoms, and that process is vastly faster than a chemical reaction. As a result of that, you see the intense light of radiation coming out of the blast, before the pressure wave even forms. Even before the cloud, you have that flash. And that is missing here,” Kristensen explained.

Mushroom clouds, which are usually an “iconic sign” of a nuclear explosion, can also happen with chemical blasts, he added.