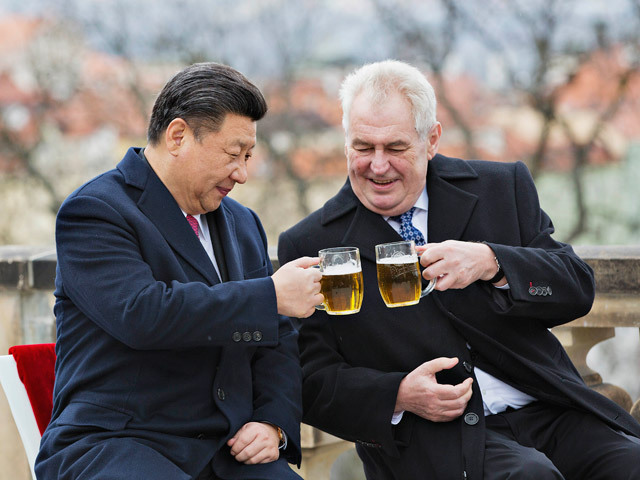 Prague has long had the image of a hotbed of international espionage. A recent report by the Czech Republic’s national intelligence agency, the Security Information Service, or BIS, does little to dispel that narrative.

It cautions that Russia and China are steadily increasing their efforts to sow division and win influence in this small country in the heart of Eastern Europe, which is a member of the European Union and NATO. Both Moscow and Beijing are widely suspected of seeking to provoke instability across the West, but in few countries are these tussles playing out more openly than in the Czech Republic.

“By utilizing a wide range of methods and activities, state, non-state, foreign and domestic actors tried to weaken Czech state institutions, influence official state positions related to international security and paint natural attributes of a democratic system as its weaknesses,” the report warned, pointing a figure primarily at Russia and China.

Both countries are suspected of seeking influence in Czech political circles and potential “cooperators and agents among the Czech population,” according to the BIS. The security assessment describes several attempted “hybrid warfare” operations, including details of a hacking hub set up by Russia’s Federal Security Service, or FSB. China’s intelligence agencies, it adds, were all operating in some form in the Czech Republic in 2018.

Adding to the intrigue of these intelligence activities is the very public battle for control of Czech foreign policy that has been playing out in Prague. Since joining NATO in 1999 and the EU in 2004, Czech foreign policy has “suffered from the inability of its main players to speak with a common voice,” Jiri Pehe, director of the New York University in Prague and an adviser to former President Vaclav Havel, told a local radio station.

Reactions to the BIS report laid bare this lack of unity once more. President Milos Zeman, a wily and controversial populist who in the past has slammed the security services as “amateurs” that exaggerate Russian and Chinese threats, described the report as “gossip” and the BIS as “bozos.”

While he has a largely ceremonial role as president, Zeman has pursued what amounts to his own alternative foreign policy in recent years, lobbying for closer relations with Moscow and Beijing, in direct contradiction of the government’s declared Western orientation. The presidential office is packed with informal “advisers” with ties to Russia and China, and Zeman himself is close to several Czech oligarchs who have significant interests in both countries.

“They call me an agent of the Kremlin and China,” Zeman complained back in 2015. “In reality, I am an advocate of the Czech Republic.”

A senior official at the Czech Foreign Ministry, speaking to WPR on the condition of anonymity, denied any disunity over the government’s foreign policy. Yet it is clear that there are several figures jostling for position.

While the minority coalition government led by Prime Minister Andrej Babis, a billionaire populist, retains a broadly pro-Western stance, Zeman has made his objections known. He was angered last year when a Russian hacker was extradited from the Czech Republic to the United States, and also objected to the Czech government expelling three Russian diplomats over the poisoning of Sergei Skripal, a former Russian spy in the United Kingdom. Earlier this year, he publicly criticized a decision by Czech authorities to block Chinese telecom giant Huawei from any state contracts.

But Babis is also ready to drop his Western commitments when it suits politically, such as his sharp opposition to the EU’s stance on migrants or climate change. It’s also fairly apparent that Babis needs Zeman to retain his post as prime minister amid corruption scandals, so he can’t confront the president too directly.

A recent report by the Czech Republic’s national intelligence agency does little to dispel the narrative of Prague as a hotbed of international espionage.

Meanwhile, Tomas Petricek, who as foreign minister is the most senior government official with an enthusiastically pro-Western stance, is limited politically because his party, the junior coalition Social Democrats, is so weak.

Russia and China are undoubtedly delighted with such confusion, says Ondrej Kundra, the head of the political desk at Respekt, a weekly Czech news magazine. “Their job is to sow division in society and encourage political fights.”

Yet resistance to Zeman’s foreign policy line is spreading to other parts of the Czech political establishment. Analysts note, for instance, that reports like the recent one by the BIS are more unequivocal and accessible to the public—a bid, perhaps, to push its security warnings more urgently across the political spectrum.

Local officials from opposition parties are also speaking out. Prague’s liberal mayor, Zdenek Hrib, has drawn the ire of Beijing for refusing to expel a Taiwanese diplomat from the capital and for flying the flag of Tibet over Prague’s City Hall. Hrib wrote recently that he is delivering on a promise to Czech voters to “return to our hallowed post-communist traditions of honoring democracy and human rights.” Zeman considers Hrib no more than a “minor complication” for Czech relations with China.

Earlier this year, the mayor of Prague’s largest district, Ondrej Kolar, decided to remove a statue of a Red Army general that had become somewhat controversial in recent years. Zeman said the Soviet-era memorial should stay in place; Moscow likened the mayor to a Nazi official.

In an interview with WPR, Kolar said that measures like removing the statue are “a revolt against Zeman’s machinations.”

“Czech society and politics can all see what he’s doing,” he added. “Enough is enough.”

The Foreign Ministry official insists these situations “have no significant long-term effect on bilateral relations” with China or Russia, but also complains that the ministry has to work hard to clear up the “misunderstandings.” Zeman’s provocations, though, go beyond antagonizing the Czech political establishment. They throw the government’s official positions on international security and foreign policy off balance.

Western diplomats in Prague say they regularly advise their own governments that Zeman does not control foreign policy, but the president’s antics often overwhelm that message. Zeman for years has used multinational formats to attempt to normalize Russia’s annexation of Crimea and to oppose EU sanctions on Moscow.

As the U.S. sought earlier this year to persuade European allies of the risks Huawei poses, Zeman went to China to apologize for his country’s “servility” to Washington and even distributed a map suggesting that the Czech government was alone in the EU in harboring suspicions of Huawei.

The BIS report noted that this kind of discord is the major aim of foreign intelligence activities carried out in the country. Russian operations in the Czech Republic are primarily aimed at its number one enemy: NATO.

Small and of limited strategic value, but keenly Atlanticist, the countries of Central Europe are often overlooked within such multilateral organizations. But Russia and China have lavished attention upon them in recent years because they see them as a route toward influence inside both NATO and the EU.

“The Central and Eastern European region is particularly vulnerable to the political influence of authoritarian regimes because their democracies are less established, institutions are weaker and local governments themselves employ populist narratives to maintain their popularity,” reads a December report by the Budapest-based think tank Political Capital.

Zeman has been able to maintain his parallel foreign policy thanks to the leverage he wields over the government. Taking advantage of Babis’ weakness, he has pushed allies into several key ministerial posts.

The minority government relies on the parliamentary support of the communist KSCM party and far-right SPD party, both of which are close to Zeman and also oppose Czech membership in the EU and NATO. For Russia and China, such political division is a sign that their influence efforts are paying off.